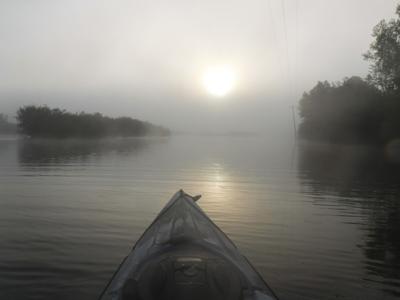 I’d managed to throw my favorite fishing lure into a low-hanging tree branch, ’cause that’s what fishermen do when they’re not actually catching fish. We know where the big ’uns love to congregate — brush piles, etc. — so when we find one of those spots, we’re conveniently going to forget we’re not always as accurate with those casts as we’d like to be. Draw back the rod, flip the wrist — and cuss a blue streak when the lure and line wrap around a limb.

I paddled my kayak into the brush, and placing the paddle across my lap, began pulling the limb toward me so I could retrieve the lure.

Yes, I know. A smarter man would have cut the line and left the lure hanging like a Christmas ornament. A penance of sorts for being dumb enough to throw something at a tree.

I am not a smarter man.

As I began the task of unwrapping the line from the limb, I heard a thump right behind me.

Now, if you’ve never fished from a kayak, let me first explain there’s not a lot of room on board. Mine is a “sit-on-top” version, and it’s exactly as described. I sit in a hollowed-out section with enough room to stretch my legs. Others prefer the “sit-in” kayaks, which have a little cockpit of sorts for the rider to sit down inside.

I turned to investigate the thump, thinking maybe a dead limb had fallen on the back of my ’yak.

It wasn’t a dead limb. It was a live snake.

I don’t mind snakes most of the time, especially when I know they’re there.

But I can’t stand surprise snakes. I’m convinced they’re responsible for some of the weird dance moves we’ve seen throughout history.

Kayaks don’t have dance floors. The stern of my kayak has a recessed part designed to carry gear, such as tackle boxes or coolers. That morning, I had nothing there.

Or at least I didn’t until a frigging snake dropped in for a visit.

Only a couple of feet long, it could have been a harmless water snake. It also could have been a water moccasin. They’re both dark, and I was out just past the break of dawn, so there wasn’t much light available. I couldn’t turn all the way around in my seat to check the snake for markings. We’re supposed to be able to tell the difference in their eyes: A water moccasin has vertical pupils, while a water snake has round pupils.

You gonna tell me I gotta get close enough to look in his or her eyes to see if it’s gonna try to kill me? Naw, bro.

I didn’t have time to ask him for his ID. I was too busy deciding which of us was gonna get to keep the kayak. I was on the verge of testing the “walk on water” theory.

I was also in the midst of giving thanks I wasn’t in one of those sit-in kayaks. If the snake had dropped down inside the cockpit with me, I’d have lost my man card from all the screaming.

I managed to get my paddle turned around enough to scoop the snake back in the water. I didn’t wait for the splash before I was setting powerboat-worthy speed records paddling away. To this day, my lure is probably still hanging from the limb, a permanent testament to my cowardice.

I’ve had other critter encounters on my beloved kayak. (I swear, I’d paddle the thing in my bathtub if my wife wasn’t so unreasonable about wanting to take baths and stuff.) Once, while paddling a river, I moved from the middle of the waters and paddled close to the bank. I was enjoying the scenery when I felt a big “thump” underneath and saw a rush of water – and an off-white flash just below. My dumb self sat there wondering what had just happened when I saw the “thump” crawl out of the water several yards away.

An alligator. At least 30 feet long, with teeth the size of my leg! (OK, maybe it was a lot smaller, but I need to justify my freakout here.) I’d never seen one up close before, and I’d just had one send a personal message he or she wasn’t happy with my presence. I may have peed a little in the river. I don’t like surprise alligators any more than I like surprise snakes.

I told a game warden I know about it, and he told me at the time it was nesting season for gators. I’d probably rolled right over the gator’s house, and that thing was letting me know I wasn’t invited. I mean, I get it. If you paddle over my house I’m probably gonna give some kind of warning. Feel free to pee on my roof if I startle you.

And then there was the beach adventure with my son-in-law Terry. We’d paddled our kayaks out quite a ways to fish, and we found ourselves in the midst of some small, black-tip sharks. Those things are a thrill to catch on a rod-and-reel, especially in a kayak.

Unless one forgets a hooked fish is gonna jump all over the place in an attempt to free itself. I thought Terry was going to fall off his kayak while he battled the mini-beast.

I don’t know anyone who practices cuddling sharks in his or her lap. I’m pretty sure those fish don’t make good pets. I mean, why call anything a “pet” if we can’t pet ’em, right? When one of the jumping sharks chose my lap as a great place to sit while gnawing his way off a hook, I once again found myself trying to decide just who owned my little seacraft. I got him back in the water before he could go full Baby Jaws on me and before I could try walking on water again.

And where did all my experiences take place?

Outside, where all the best stories happen.

It’s a beautiful world out there, especially here in East Texas, and especially in the early fall. We’ve all sweated our way through the heat and humidity of the summer, and we sometimes limited our outdoor activities because of the weather and the danged mosquitoes. We may have found some awesome activities, but it was hard to completely enjoy any of them. Personally, I like being able to breathe when I’m outside trying to get some fresh air. Summer in Texas doesn’t allow much breathing.

That’s what’s so awesome about this time of year. Fall is on the way. It’s not cold yet, but neither is it leaving us gasping for air and sweating by the gallons. It’s the perfect time to get outside and look for some new stories to tell. The lakes nearby offer adventures on or around the water — and some beautiful views while there. Our Pineywoods practically beg us to take a hike, or to camp or simply to take a day to drive around and look. Drives to the lake with my honey are some of my favorite things ever. She’s already adorable, but seeing her on her blue kayak while plowing through the water is enough to make an outdoor dude’s heart skip a lot of beats.

And as long as we’re dealing with a virus crisis, what better (and safer) place to be than outdoors?

Go for it. Get outside and look for some stories. I mean, you’re (hopefully) not gonna have a snake drop out of your ceiling, a gator swim up under your bathtub or a shark jump up on your couch, right? You’ve gotta get out there where the cool stuff lives, and trust me, we have so much of it right where we are.

Admit it. You know you’ve always wanted to ask a snake for his ID.