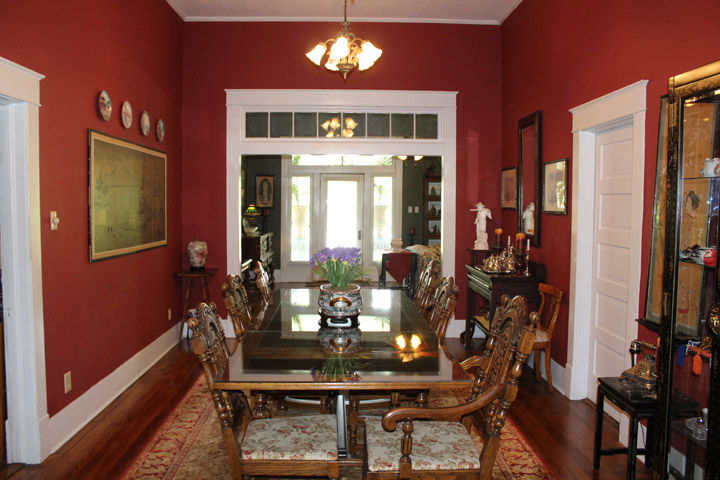 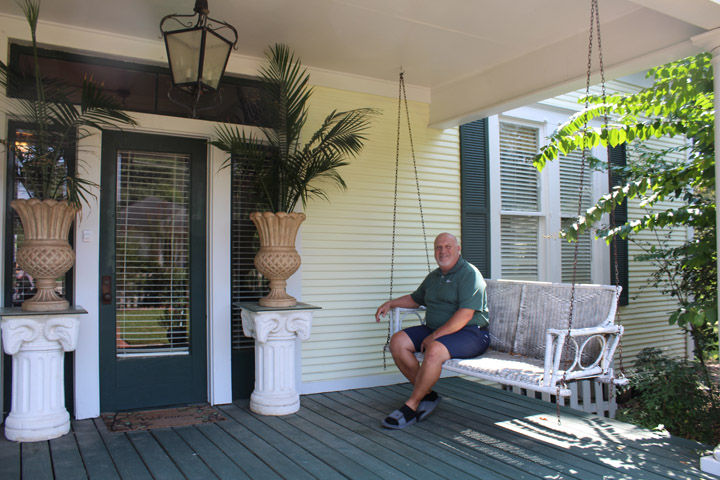 Owner Linford Lentz rocks on his white whicker porch swing set up on a wrap around porch. 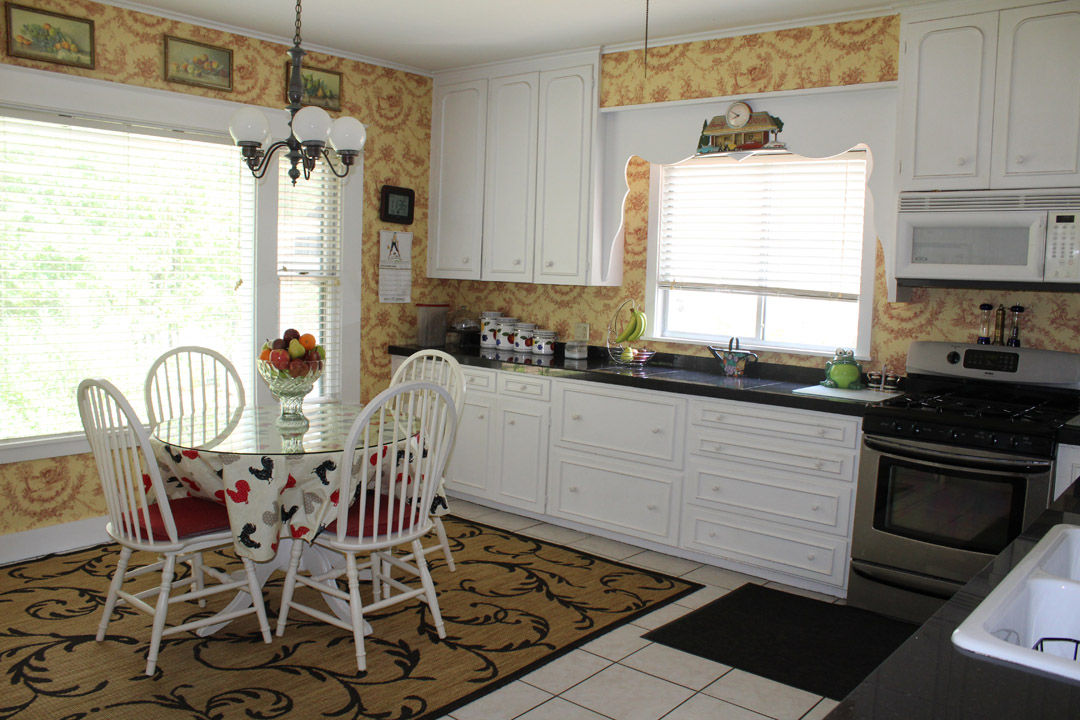 The spacious kitchen is full of old charm and modern conveniences. 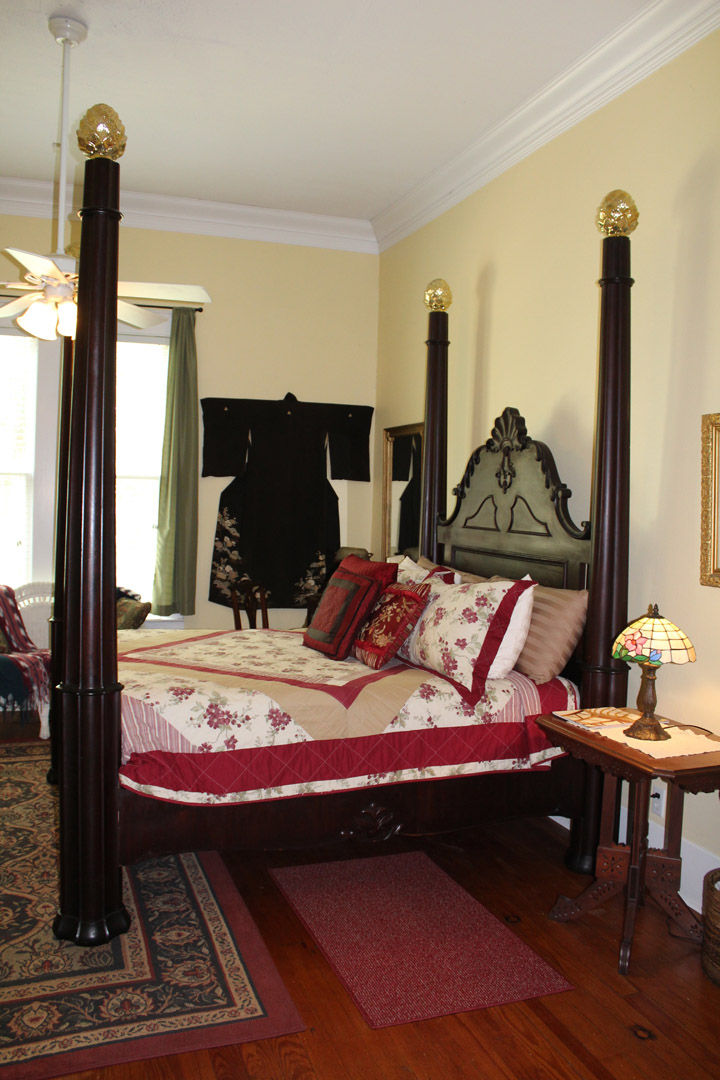 Owner Linford Lentz rocks on his white whicker porch swing set up on a wrap around porch.

The spacious kitchen is full of old charm and modern conveniences.

For the owner of this 102-year-old house, this saying couldn’t be more true.

Linford Lentz and his late wife, Mary Jane, bought the house eight years ago. “As soon as I walked in, I knew I was sunk because I knew that this was the house that Mary Jane was going to want,” Lentz said with a smile. “It was a done deal after that.”

The house was built in 1913 and sits on a pier and beam foundation.

“When people find out the house is as old as it is, they ask what it looks like on the inside,” he said with a laugh. “I go, it looks like somebody’s grandmother lives there … but it has lot of character and is very comfortable. It’s a very gracious old house.”

The front of the house sports a wraparound porch with a wicker porch swing. As soon as you cross the threshold into the living room, it’s a stroll down memory lane — antiques, collectibles, history galore.

To the left of the living room is a trestle-style library table from the turn of the century, an old radio that his grandfather brought back from Chicago, old family photos and a French antique barometer.

Hanging on the wall to the right is a set of three watercolor paintings that his sister created.

“Years ago I was an antique dealer and I had two mahogany china cabinets. When my sister came down to visit, she really wanted one of them. I told her, ‘If you do watercolors of photos of the family farm in Oklahoma, then I’ll trade you for the china cabinets.’” Looking at the pictures with a sigh, he said, “That’s where we spent our summers and learned to waterski. It holds so many good memories.”

Attached to the living room is the front bedroom done up in avocado green. Its main feature is an iron bed in avocado green with gold accents, which used to be Lentz’s bed when he was a child.

He repainted the room last year. “I think the color is so soothing and comfortable,” he said.

The room used to serve as the nursery and had carpet instead of the clear pine floors that fills the majority of the house. “I ripped all the carpet out and redid the floor to match the rest of the house,” he said. “In East Texas 100 years ago, clear pine is what passed for hardwood floors. All the wood floors except for this room are original to the house.”

“You’ll see a lot of things with Asian influence because my wife liked it,” he said. “Years ago, before we married, I worked for a Japanese family in Denver, Colorado, for eight years. So I’ve had some things they have given me and we tried to work them into the décor.”

A silver service set, which used to be his parents’, rests in the corner. “I think I got it because nobody wanted to polish it all the time,” he said with a laugh.

Off to the side of the dining room is the master bedroom.

“This is my sanctuary,” Lentz said. The master bedroom features a bed, his and hers closets, dresser, desk and the “ultimate” bathroom. The highlight of the bathroom is the cream-colored Jacuzzi.

Homemade bamboo torch lamps cast light on his and hers sinks, framing a cabinet between them. Walking farther into the bathroom, one finds a walk-in 6-by-6-foot tile-lined shower with two showerheads. A privacy door hides the toilet.

Continuing through the house, Lentz moved to the guest bedroom that holds a pre-Civil War four-poster bed.

“Before the Civil War, the cabinet maker would come and measure you and then he would make a bed that size,” he said. “And then you would go to a mattress maker who would make the mattress to fit the bed. Only after the Civil War did they start doing standardized bed sizes. This particular bed is a little longer than a queen but not as wide as a king — 64 inches wide and 76 inches long.”

To the right of the guest room is another bathroom and shower. Down the hall is the kitchen, which is bright and open with windows to let sunlight in. The kitchen displays granite tiled countertops and tiled floor.

“My wife loved to cook and this kitchen gave her lots of space,” Lentz said.

The laundry and dryer are hidden conveniently behind closet doors.

Next to the kitchen is a family room with a wall of books and items.

“When you look up in the attic, you can see that this was either an add-on or a screened-in porch that they closed in,” he said. “And so this kitchen was probably much smaller than it is now.” The entire house is about 23 or 24 hundred square feet.

The house also has a 20-by-15-foot air conditioned room in the attic that serves as a storage room.

There are two garages and a 500-square-foot apartment in between.

Lentz walked outside around the house, admiring the Mexican petunias, a buckeye tree and jasmine that blooms in the spring.

Coming full circle, we ended our tour on the wraparound porch, discussing life and memories on the porch swing.

“With a 102-year-old house, there is always a project and I love that,” he said. There are three other occupants who live in the house: two cats, Chewie and Meepers, and a rambunctious blind dog named Dani.

“I don’t have a favorite room, because there are elements and furnishings in each room that hold special memories for me,” he said. “There is no place like home.”