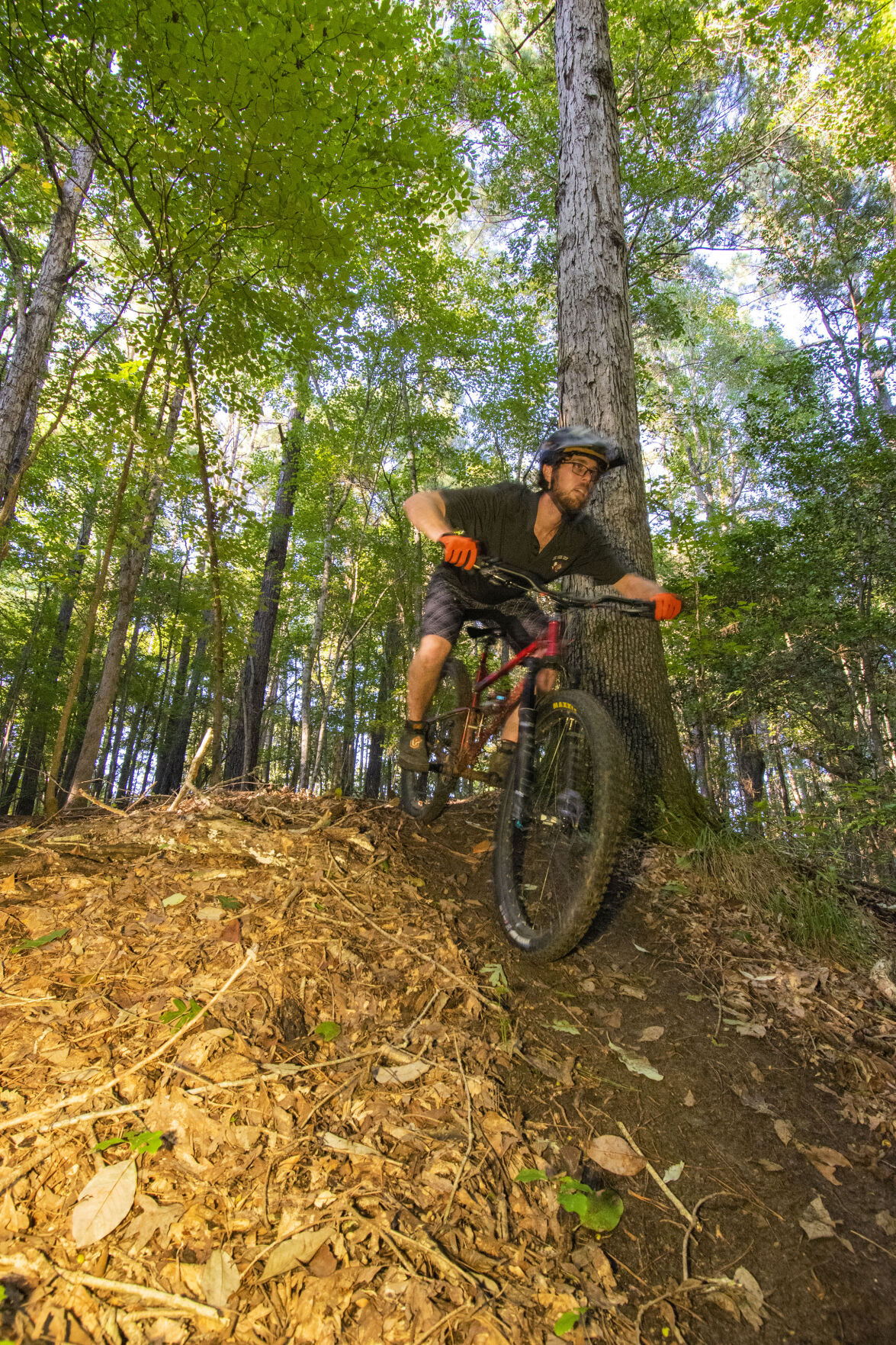 Joe Miles has the perfect last name for someone who loves to get out in nature on his mountain bike. But he wasn’t always into bikes. In a funny way, his passion for mountain biking found him.

Joe learned to ride a bike as a kid, but it was seeing the Raider Trails as a freshman at Stephen F. Austin State University that set him on his path.

“I remember seeing the trails on campus, and I thought, ‘You know what? That looks really fun.’”

Not only would a mountain bike be fun out on those trails, it would also be practical for getting around campus, so his grandparents bought his first mountain bike as a gift for his second semester of college.

“It’s one of those things where I just made a snap decision, and it took me down a path that I never would have expected.

“I eventually upgraded every part on there including the frame,” he laughs.

“It got to the point where the owner of The Bike Shop (in Nacogdoches) said, ‘Hey, stop breaking stuff, learn how to fix it, come work for me’ kind of thing, and that’s how I got into the mechanic’s side of it.”

After a couple of years working at the Nacogdoches shop, Joe spent two summers in New Mexico at the Angelfire Ski Resort and Mountain Bike Park as a bike tech doing regular maintenance on a fleet of 50-70 bikes, as well as sorting out rental bikes and safety gear for riders. Whenever possible, he was also expanding his bike knowledge as an apprentice to the more experienced mechanics at the resort.

“Two summers in a row. Just a basic lowly bike tech trying to learn what I could from the guys who had been doing it for 30 years. When I wasn’t doing my bike tech job, which was my description, I was over at the service area with the head mechanic and the manager working on customers’ bikes as well, so I was kind of learning from them as an apprenticeship-type-thing.”

The Bike Shop — which was the only bicycle shop in Nacogdoches or Lufkin — closed in 2018, which left Joe without a job, but it also presented him with an opportunity. There was a real need for an experienced bike mechanic who could help keep East Texas riders rolling.

“After the shop closed, and I was left without anything to do, I finally listened to friends and relatives who had been telling me for years to start my own repair business.”

To get Miles’ Mobile Bike Shop up and running, Joe’s parents bought him an empty box trailer as an early graduation gift, and he started building it out and customizing it into a workshop on wheels.

Building up his cycling toolbox from scratch, Joe gradually acquired the tools and equipment he needed on a job-by-job basis.

“I didn’t have anything to start with. I would get a job and I would know what was needed for that job and I would order that tool and hope that was enough to pay off the tool and just built it up from there.

“It took probably about a year to get up to square one, so to speak, where I didn’t always have to worry about every single job needing to get the stuff beforehand.”

The interior of the trailer is just about the cleanest and most organized workshop I’ve ever set foot in. Every tool and part has its place, and Joe has the whole thing wired up for lighting and even a set of desktop speakers.

As someone who loves to ride but slacks on maintenance far too often, I’ve called on Joe many times. It’s always a pleasure to hang out and chat while he works, picking his brain for biking knowledge, talking about new gear and upgrades or just shooting the bull and catching up.

Although his main area of expertise is high-end mountain bikes, Joe can work on just about anything that rolls on two wheels and runs on pedal power. From fixing flats and basic tune-ups, to suspension service for custom mountain bikes, Miles’ Mobile Bike Shop can come to you wherever you are and get you back on your bike in no time.

Joe has been active in organizing trail rides with the Nacogdoches Bike Club in the past, and often volunteered at mountain biking events, providing free labor and charging only for parts, but group rides present a challenge during the pandemic. However, he is hopeful that he’ll be able to start organizing group rides again as more people become accustomed to observing the necessary safety measures.

Back in July, he put together Chaos In Tejas — a one-day trail ride challenge that utilized three different trail networks across the Pineywoods region, allowing riders to get out in nature and have fun on their bikes while staying safe and maintaining social distancing protocols.

“Outdoors is the safest place — what a wonderful phrase,” he says with a smile.

Joe recently graduated from SFA with a degree in botany and a minor in combined sciences. School and graduation had been his focus for the past year, but now he has more time to focus on his business, and with no brick-and-mortar bike shops in the area, he is filling a niche for East Texans who love to ride.

“I’m gonna be focusing more on this side of my life, so to speak, and see where that goes.”

Wherever it goes, there’s probably going to be some dirt, some sweat and plenty of smiles per mile.

To learn more about Miles’ Mobile Bike Shop visit milesmobilebikeshop.com. There you will find Joe’s contact info and pricing for services, as well as trail maps and other resources for East Texas riders.