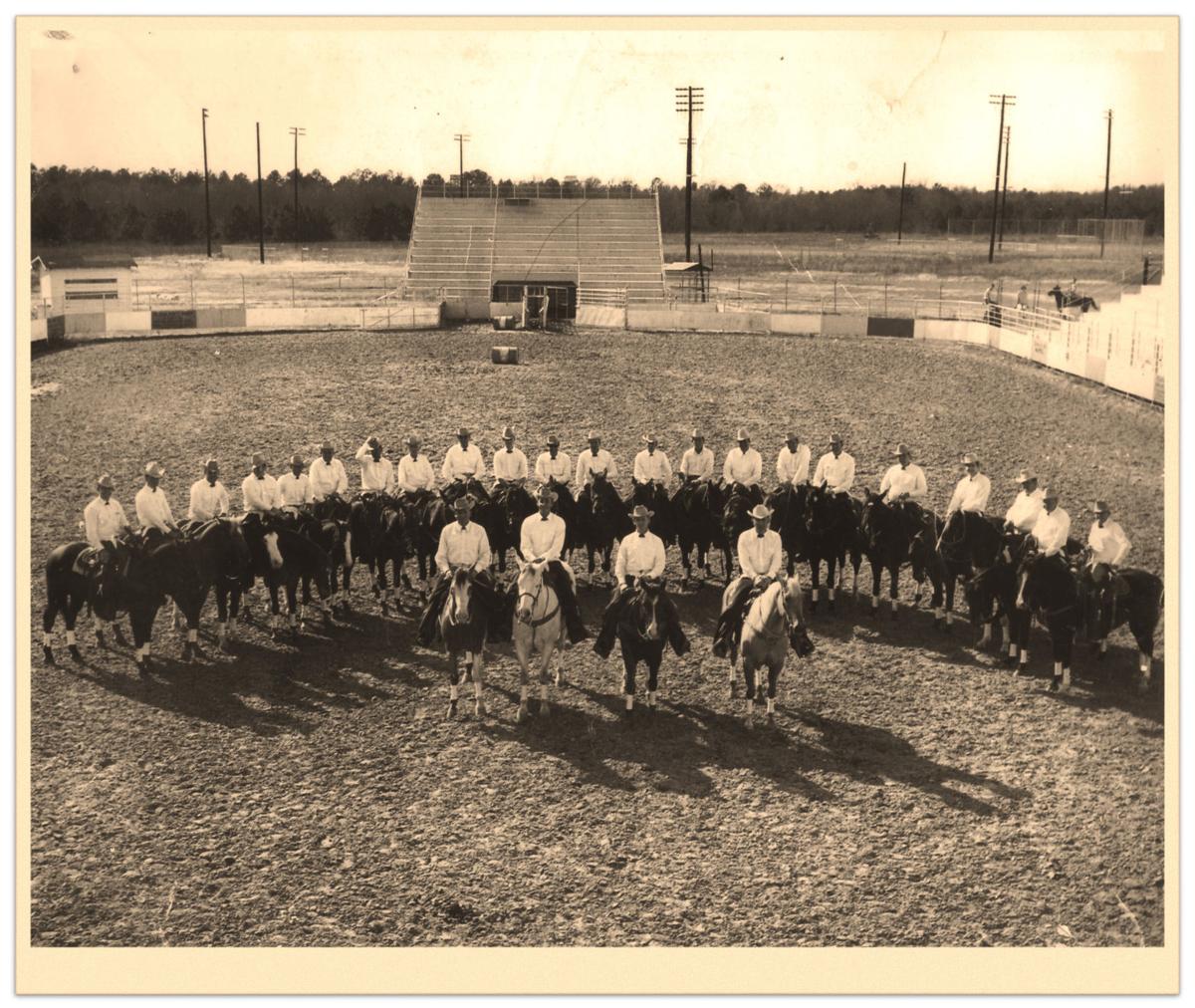 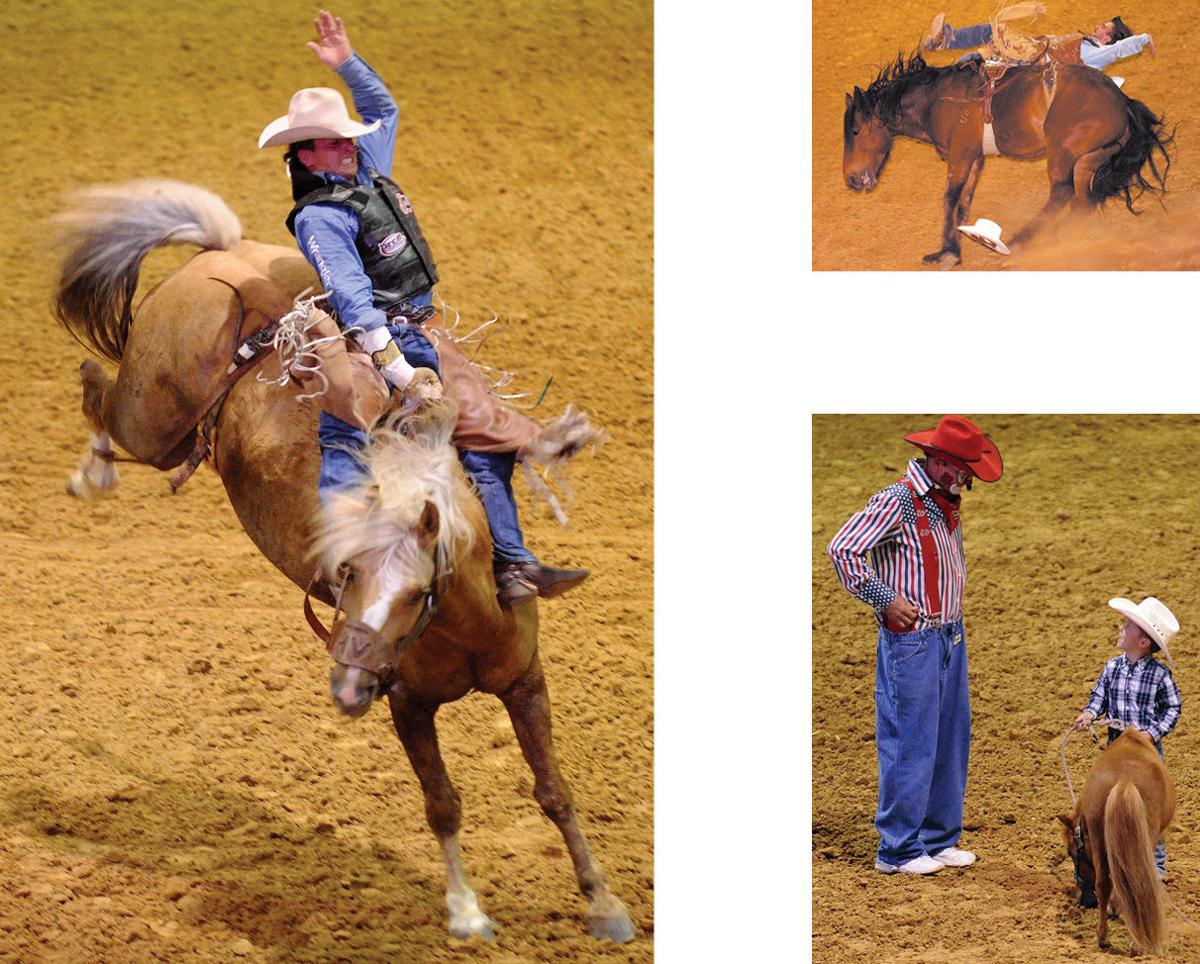 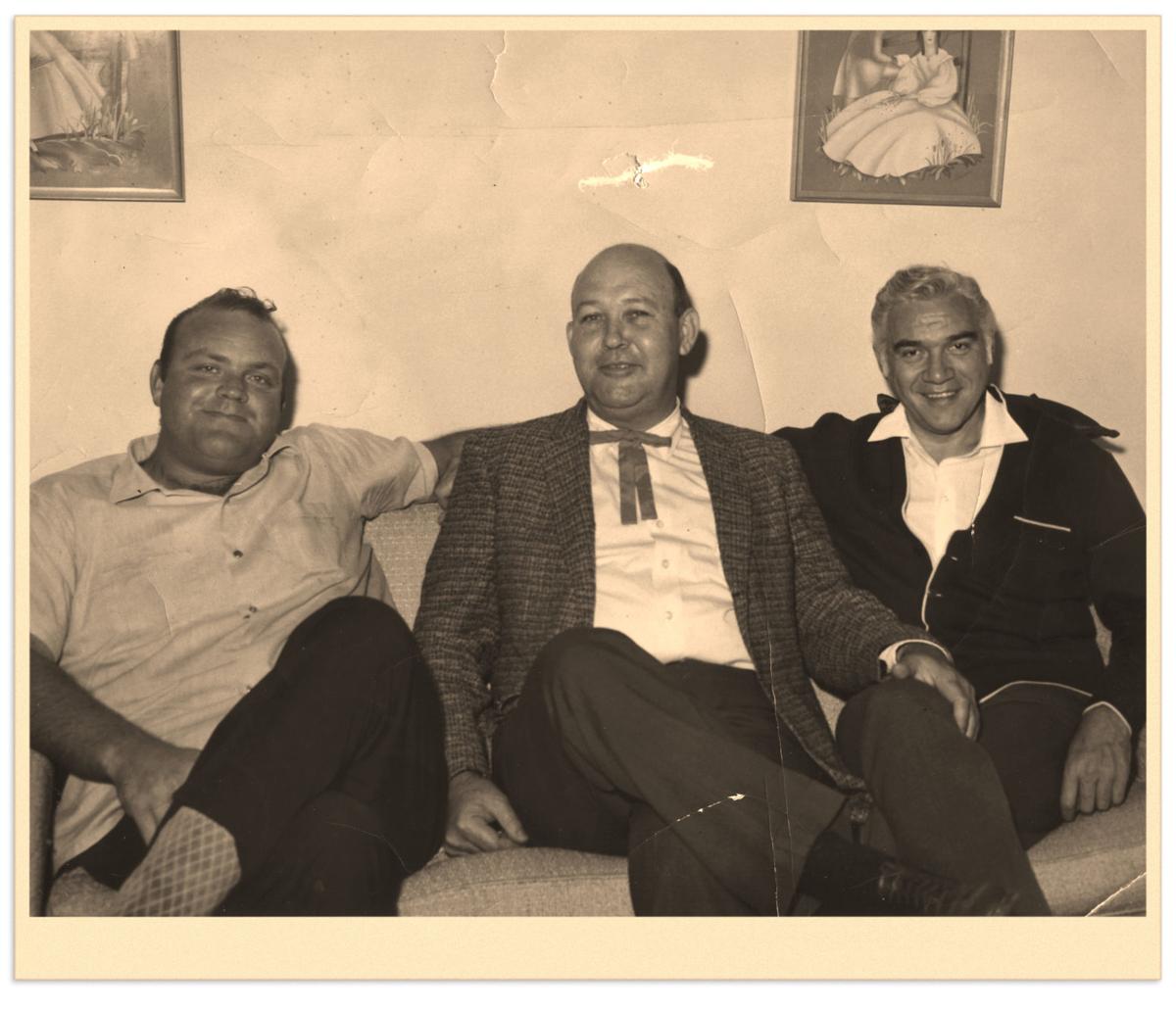 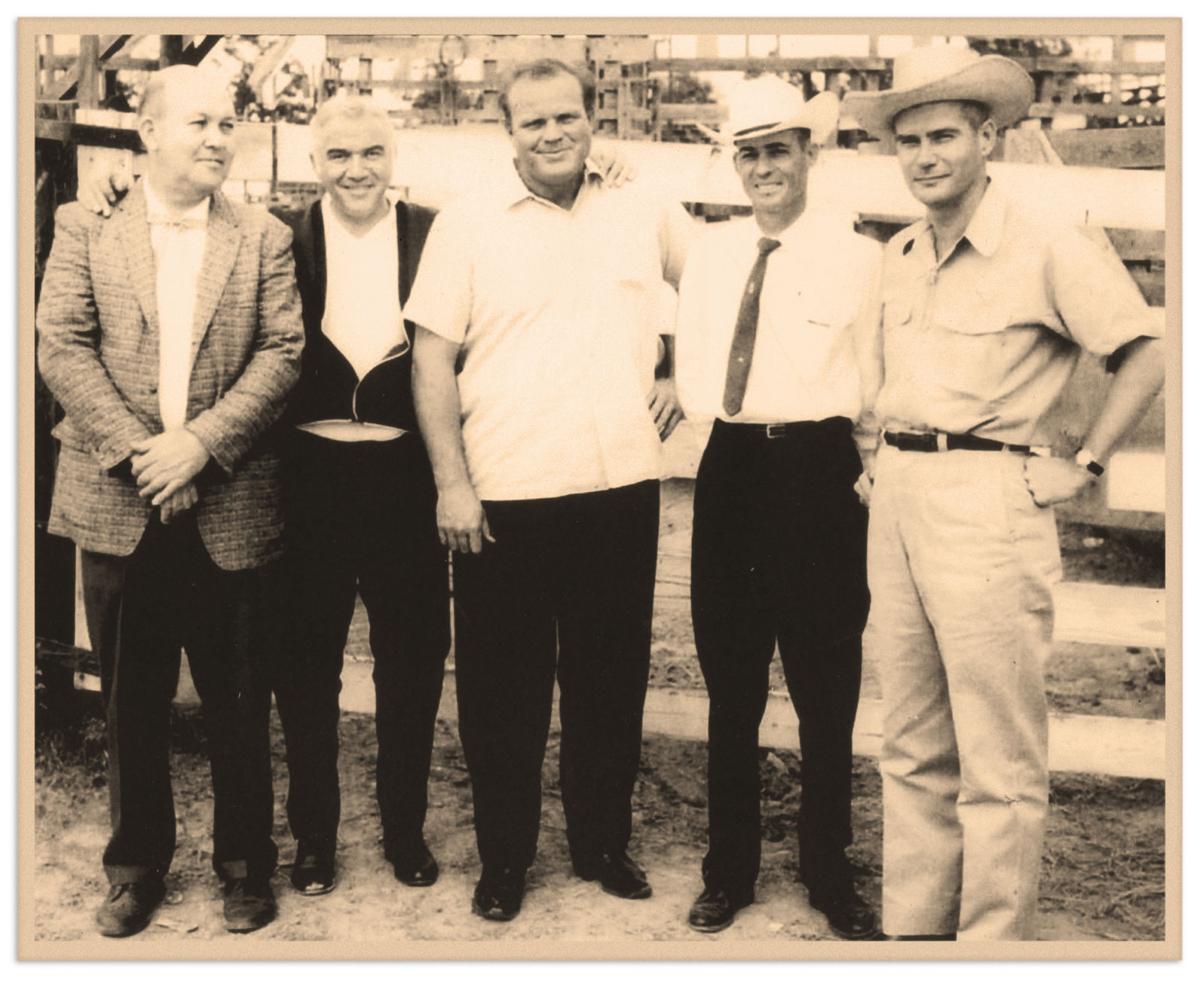 One of Angelina County’s most successful and beloved community events turns 65 this year and traces its origins to seven men, a group of girls and a lot of horses.

That same year, the Posse hosted the first Angelina County Sheriff’s Posse Benefit Rodeo, according to history collected by Debbie Lee and members of the Angelina County Mounted Patrol.

The next two years also were highly successful as the rodeo quickly evolved from an all-girls event to one that included men, as well. The Posse raised enough funds during those years to donate to the treatment center and build an all-lumber arena on U.S. Highway 59 north — the D. H. Walker Arena, which later became the D.H. Walker Mobile Home Park.

By 1957, the rodeo had grown so large that the Posse decided it needed assistance to handle the crowds, and the Lufkin Host Lions Club was invited to take over concessions.

The Posse celebrated the opening of the all-lumber arena in 1959 with nationally known TV actor Dale Robertson, best known for his roles as roving investigator Jim Hardie in the television series “Tales of Wells Fargo,” and Ben Calhoun, the owner of an incomplete railroad line in “Iron Horse.”

Jim Todd’s father, James, was president of the Lion’s Club in 1960. As a youngster, Jim worked the rodeos, selling concessions and helping where needed.

“My fondest memory was getting to be around the cowboy stars we all idolized,” Todd said. “I absolutely loved getting to ride around with Hoss and Ben Cartwright and talking to them. I must have been 11 or 12 years old. That was absolutely the best.”

One of that era’s most famous TV personalities, Minnie Pearl from “Hee Haw,” appeared in 1962. Other celebrities who came to Lufkin in the mid-1960s included the Dr Pepper Girl Donna Loren and Homer & Jethro, who performed the first two nights of the 1964 rodeo. The duo was best known for their song satires, dry comic delivery and instrumental virtuosity.

The Posse also wrangled appearances by Walt Garrison, known for his dual cowboy roles as a fullback for the Dallas Cowboys and a professional rodeo competitor.

With the crowd growing each year, the rodeo quickly outgrew its lumber arena and work began on an all-steel arena at Tener Park, what is now Morris Frank Park. With assistance from welder Pete Fenton and Lufkin Industries, the $35,000 arena was completed in just five months — just in time for the May 2, 1962, rodeo.

The move to the new arena brought another big change, a new name for the Posse. The newly dubbed Angelina County Mounted Patrol, which had grown to around 22 members, was performing drills and was in high demand for rodeos throughout Texas and Louisiana, including the Houston Livestock Show and Rodeo.

In 1964, the group increased the prize money to draw better-known rodeo contestants, which helped raise more funds for the treatment center.

In 1968, Raymond Havard joined the Mounted Patrol and took the reins of the rodeo using his experience to grow the event, as well as bring in horse sales and horse shows to Lufkin. He served as rodeo coordinator from 1972-74.

In the early 1970s, the rodeo became a member of the Professional Rodeo Cowboys Association (PRCA), and it remains part of that organization today.

“We had a lot of success throughout the years,” said Mike Mathis, who has served as the Lions Club rodeo coordinator since 1976. “Putting on a rodeo outdoors was always a challenge. The last year in the arena at Morris Frank Park it rained 14 inches in four days.”

In the early 1980s, the Mounted Patrol and Lions Club agreed the proposed Angelina County Exposition Center would be a huge asset to the rodeo, Mathis said. “So, we took all the money we had, and some we did not, to help with the construction.”

The two groups put a combined $120,000 toward the Expo Center’s completion.

“That facility was the catalyst we needed to take the rodeo to the next level,” he said. “We found out putting on a rodeo inside was a whole lot different than in the past. It was time to not just maintain. We have the room and the opportunity to grow it.”

The Lions Club and Mounted Patrol continued to develop the rodeo through the 1990s on the expertise of Mathis, who left his daytime banking job and launched a second career as a full-time rodeo announcer.

Now known as Mr. Rodeo, Mathis gained experience and notoriety as the rodeo announcer on horseback. Last year, he announced at 40 rodeos from Florida to Utah.

Along with working rodeos around the country, Mathis continues to coordinate and work every night of Lufkin’s annual four-night event — 44 years and counting.

In 2013, the Angelina County Mounted Patrol disbanded. Aging members and fewer riders, the organization could no longer meet the obligations of the drills, shows and volunteer efforts it had been doing for nearly 60 years. However, the Lions Club has not missed a step — filling the vacant volunteer positions with increasing numbers.

“Without the guys willing to sell tickets, work the concessions and do all of the things it takes to put this on — not just that week, but throughout the year — it would not be at the level it is today,” Mathis said.

Kevin Smithhart, Lions Club member since 1981, remembers his year as Lions Club president and riding into the arena each night on horseback to open the rodeo. “I was so nervous that first night. I was not a horseman.

“The majority of the Lions members are there every night plus our work night Monday night,” Smithhart said. “We paint the arena, label and clean the box seats and hang all the banners.”

Monty Stafford served the rodeo as both a member of the Mounted Patrol and the Lions Club.

“I had a lot of jobs at the rodeo over the years,” Stafford said. “Mostly I worked the main concession stand. I think I have been making popcorn for the past 10 years.”

Mathis said Lufkin is lucky to have the dedication of the Lions Club members.

“I have seen what others do. I have seen what works and does not work,” Mathis said. “Other rodeos do not have the feeling of this event. This rodeo is special. Lufkin is a group that has fun and works hard because they believe in the product and the proceeds.

“We have style, speed, color and class.”