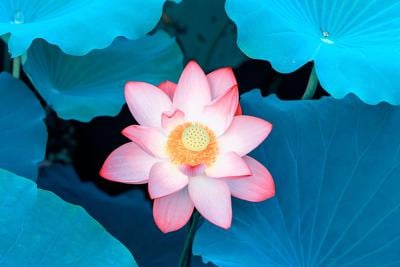 I’m the only one who hunts this pond. Everyone else gets a bit creeped out by it staring back at them with hundreds of eyes. Fritz, my black lab, is the only one that’ll join me in my blind. He doesn’t seem to mind the weird seedpods of American lotus (Nelumbo lutea) swaying in the cool wind, each filled with a dozen unblinking, eye-like nuts. He smells the scent of ducks on that wind and is vibrating in anticipation. The cold water beneath the gray sky is paradise for him, especially when he’s swimming back to shore through those lotus pods with a duck in his gentle mouth.

There are now three mallards in the blind with me and half my coffee is gone. It’s time. My hunting clothes are removed down to a pair of swim trunks. With a shout I lunge into the cold water. I run my hands down the lotus stalks into the muck at the bottom of the pond. Follow the root ... ah-ha. Up from the mud comes several thick tubers joined together in a line. I fling them at the shore where Fritz takes them to the blind. It was hard to train him to stay on land during these gatherings, but he’s a smart dog.

Two more plunges into the water, two more groups of lotus tubers are harvested, then it’s a run to the truck, grabbing my thermos of coffee and clothes. It takes 10 minutes of the heater running and all my coffee to warm back up. I scrape the last of the mud off, get dressed, and pack up my gear, ducks, decoys and tubers. The mallards and lotus will end up in several recipes together ... lotus hash browns? Mashed lotus tubers with gravy? Stir-fried tuber with ginger and sesame? So many recipes available on the internet.

Most people mistake American lotus for some sort of water lily, but the lotus leaf is a complete circle growing from a stem sticking up to more than a foot out of the water. True water lily pads are an incomplete circle that floats on top of the water from a flexible stem. More importantly, water lily tubers taste terrible while lotus tubers taste good. The tubers themselves are joined end-to-end, with only a small reduction in diameter at the joint. Clean them well, peel them to reveal their white interiors, and then if you slice them perpendicular to their long side, you’ll see they have the same circle of hollow tubes running through it, just like their Asian relatives.

The seeds, with their staring nature, are edible in mid-summer while still green. That’ll be another article. For now, think of the extra food that awaits you below the water. As a hunter, you know how harvesting wild game bonds you to nature. Adding in some gathering brings even more of nature’s flavor to your plate.